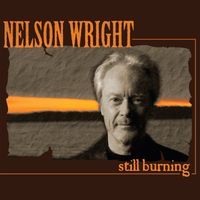 From the recording Still Burning (MP3)

I met Mattie in old Cairo, down beside the waterline,
Where the Mississip and Ohio, marry up and intertwine.

She was wearing a white sun dress, moving with a fetching grace,
It was like a sweet caress, just to watch the sun shine on her face.

I took Mattie’s hand in mine, we walked that river’s great divide,
We spoke of fortune’s sweet design, and I lay down by Mattie’s side.


She touched my palm and said to me, there’s your life line good and strong,
Then she said so tenderly, your heart line’s deep but it’s running wrong.

But I was headed for Biloxi Bay, with nothing for to do but roam,
While Mattie was going the other way, to Red Wing which had been her home.

So I let Mattie slip away, but there are things you don’t forget,
There are tricks that time can play, the cruelest one is called regret.


Outside of Red Wing, north of town, the upper Mississippi flows,
It travels past old Cairo down, to the sunny Gulf of Mexico.

That winding river marks the way, like the heart line I did dispossess,
It back tracks to a better day, and Mattie in her white sun dress.